Great Migration: What to Expect

What to Expect from a Great Migration Safari

“No one can return from the Serengeti unchanged, for tawny lions will forever prowl our memory and great herds throng our imagination” – George Schaller

Africa’s Great Migration is a spectacle of the survival of the fittest. Every year, over a million wildebeest, zebra and gazelle move continuously across the plains of the Serengeti and the Masai Mara in one of the most spectacular natural displays on earth.

The wildebeest are the principle migrators reaching over a million in number and are followed by the other main migrators, such as Thomson’s gazelle, zebra, and eland. They are joined by eager predators ranging from lion to hyena, leopard, and cheetah.

The Great Migration is wholly dependent on seasonal factors and is not a single event- rather an ongoing cycle of herds searching for fresh grazing grounds. This means that the migration is essentially a continual circle around the Serengeti-Mara ecosystem and a constant sequence of life and death.

No two years are the same and the herds’ movements are always different so it can be difficult to pinpoint exactly what to expect from a Great Migration safari. They do tend to follow a seasonal cycle which can be broken down into significant events including calving season, mating season, and the river crossings.

January to March is the wildebeest calving season. If the migration did have a ‘beginning’ this could be considered it. In January, migrating herds can generally be expected to be seen grazing on the lush green plains of the Southern Serengeti and Ngorongoro Conservation Area in Tanzania.

This stage of the migration offers unforgettable scenes as hundreds of thousands of calves enter the world in a coordinated birthing during a three-week period in February. Approximately 500 000 wildebeest calves will be born onto open plains; ready to join the colossal herd. Within moments, the calves are able to walk and within a few days, are able to attempt to outrun predators.

The annual calving season offers eager predators an easy feast. Driving across the plains you are sure to see remarkable sightings of lions, hyenas, and cheetah keeping a close watch on the herds. 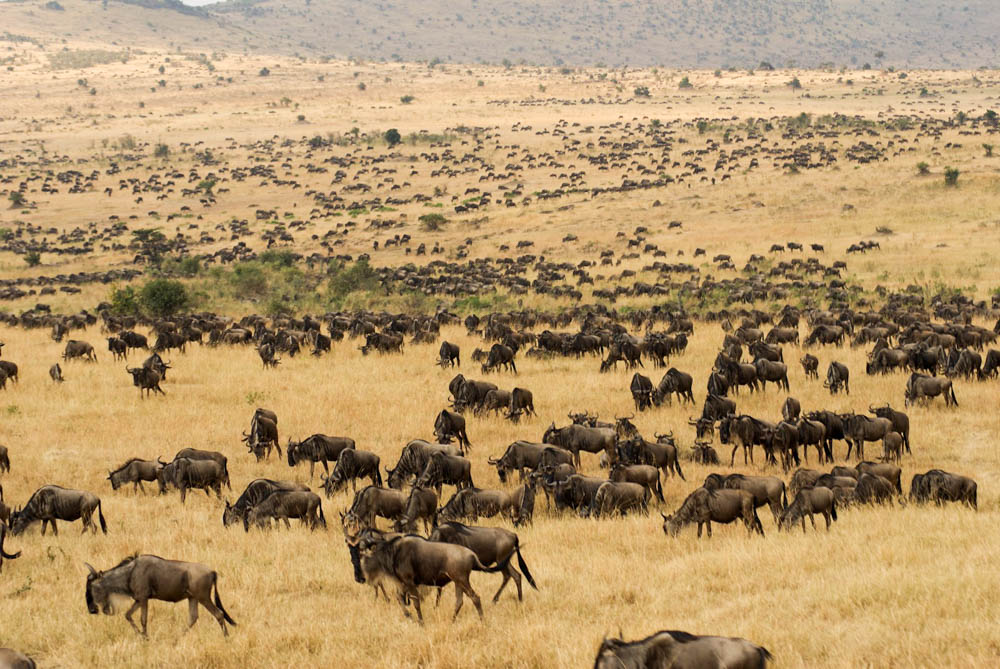 Around March, the short grassy plains of the southernmost Serengeti start to dry out and the ‘short dry season’ starts coming to an end. The 'long rains' are falling in Tanzania and the herds begin to migrate westward to grassier plains and woodlands of the Serengeti Western Corridor. The rain can, at times, make it quite tricky to follow the herds during this stage of the migration as roads become sodden and difficult to navigate.

This move is caused mainly by their response to the weather and the growth of new grass that comes with the rains. Hundreds and thousands of years of natural selection and inbred knowledge also account for how and why these animals know in which direction they must travel.

From the end of May, the rains begin to ease off and the migration gains traction again in anticipation of the mating season. 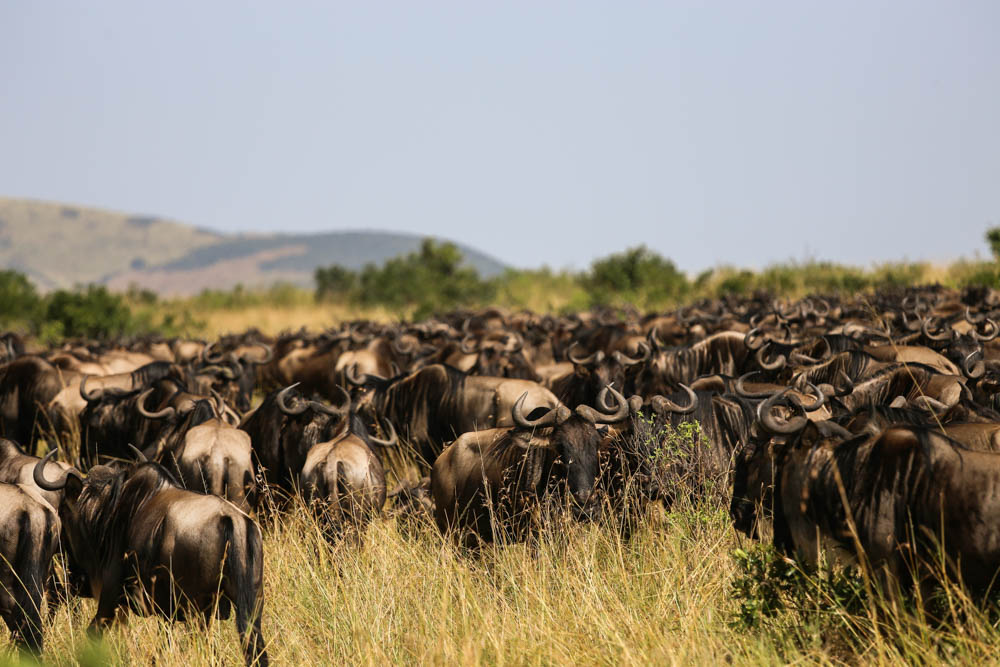 After the rains set in, the herds begin to move north-west. During this period, the herds merge on the plains and in the woodlands of the Serengeti Western Corridor as mating season reaches a peak. It is also during this time that the dominant and territorial males tussle in highly energetic duels, but it is ultimately the female who chooses her adequate mate. 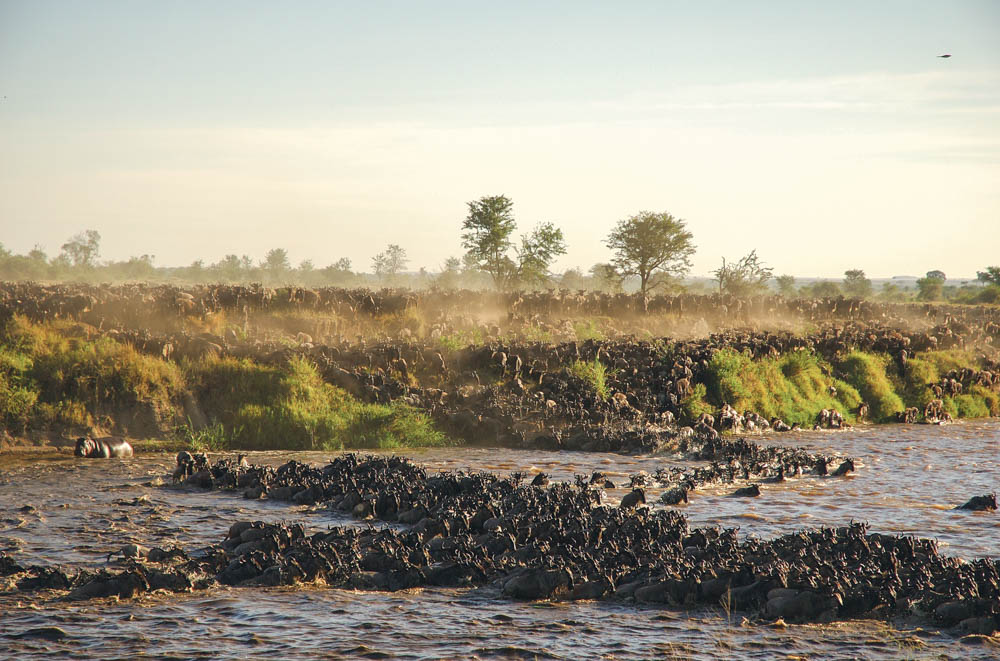 Following the rains, the herds begin to head north from the Western Serengeti and into Kenya and the Masai Mara Game Reserve from June to September. During this move, the wildebeest are faced with treacherous river crossings; the Grumeti River in the Serengeti, and the Mara River along the border between Tanzania and Kenya.

At this time the rivers are highly flooded and crawling with crocodiles making for dramatic scenes. The herds boldly and bravely leap across the water to make it to the better grazing grounds on the opposite side of the river.

Watching the herds’ crossing these rivers is an unmatched experience, where the wildebeest are met and faced with immediate hostility by the crocodiles; a display of nature’s survival of the fittest.

An End and a Beginning 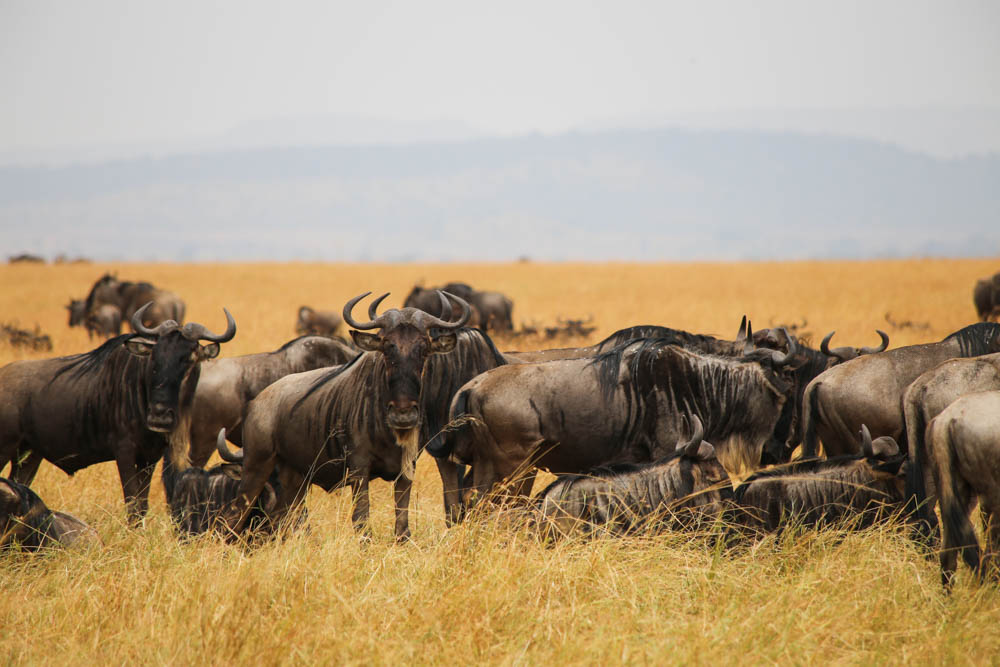 Come October/ November, the succulent grass in the Mara is finished and the migrating herds head south for the Serengeti as the first of the ‘short rains’ start falling on the short-grass plains. The herds spread out and scatter once they reach the open plains of the Serengeti; where calving will take place and the entire cycle begins again.