Sonja and Shiree recently returned home from the trip of a lifetime. They travelled through East Africa to Tanzania and Kenya before heading to Victoria Falls and Chobe National Park, Botswana. Their trip was filled with the Big 5, unbelievable scenes and unforgettable memories. Sonja shared some the highlights of her trip with us.

So where does one start when taking the trip of a life time?

It just does not happen on its own; it takes a special amazing person and a wonderful safari company to make it all happen and without Safari365 and a special, amazing consultant like Wanita I think I would have given up. Though all the changes and indecisions by us we needed someone like Wanita to help us desperately and she came through for us in so many ways. The safari was exciting, effortless and ran so smoothly. It was class all the way.

On our first full day, we drove to Tarangire National Park. When we entered the park we saw a herd of elephant with babies in tow and it was magical. My friend Shiree had never been to Africa so this three minute drive brought Africa straight to her and her face lit up. You know that feeling when you make someone happy and you don't expect anything in return – it was WOW! 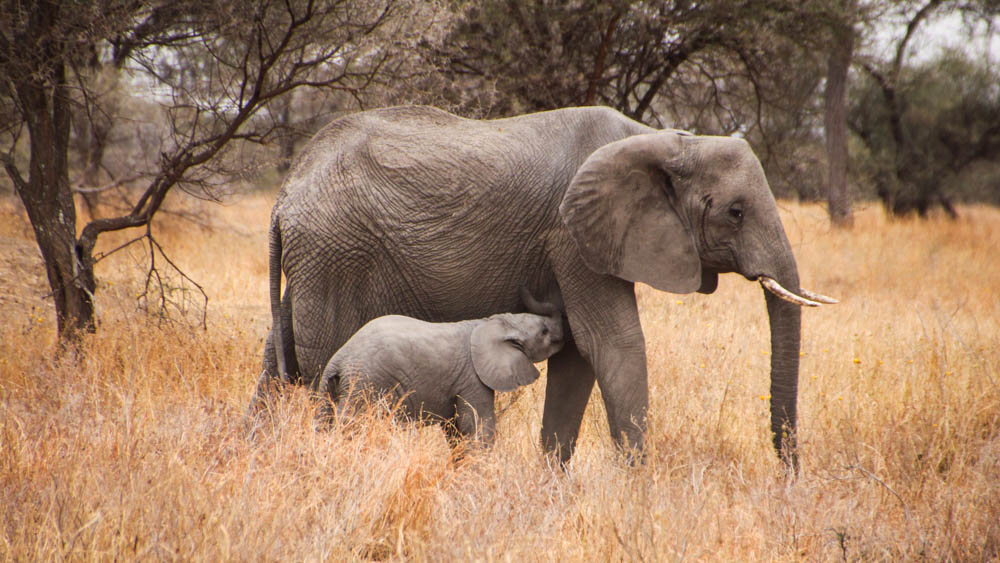 In Tarangire, we came across this amazing spot that I am calling our “little place of Eden” which had the mountains in the background a watering hole in front of us with animals frolicking and bathing in it. We stayed here and had some lunch just listening to the sounds of nature, birds, zebras, hippos and elephants - no wonder animals never want to leave here.

On the way out of the park we came across a leopard in a tree minding his own business which was awesome. I had been to Africa before but I had never seen four of the Big Five in one day- it was beyond expectation. 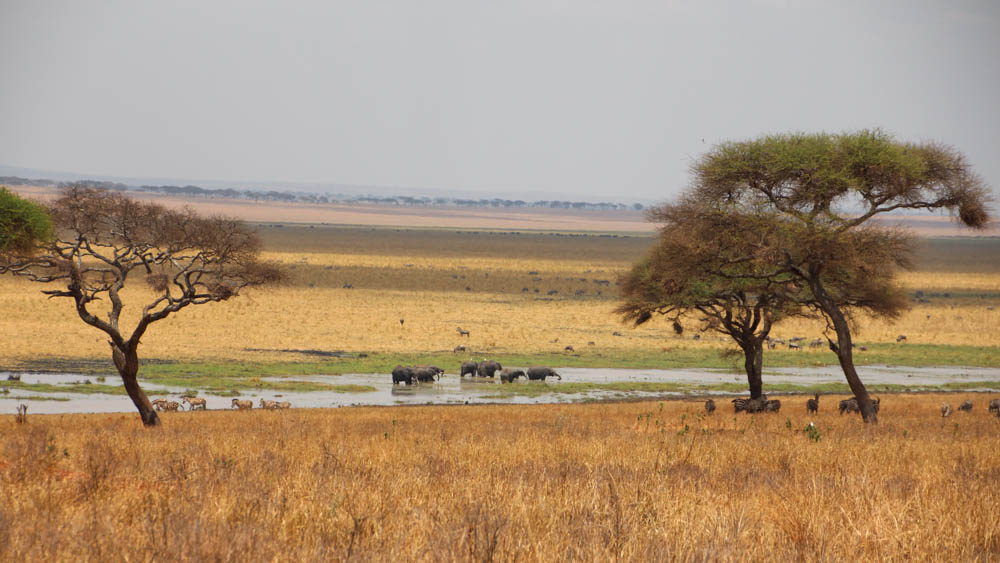 Our next destination was Lake Manyara.  Another amazing park with elephant everywhere along the road side so we had to keep an eye out for any road blockages!

I had visited the Ngorongoro Crater before, but the immense size of this place still thrills me to the core. I had asked our driver Richard to stop by the lookout point for Shiree; her jaw hit the ground and her eyes widened in disbelief at what she was seeing.

On entering the crater our first animals were two lioness and two cubs. Richard heard over the radio of a male and female lions working on their kill by the side of the road so off we went. 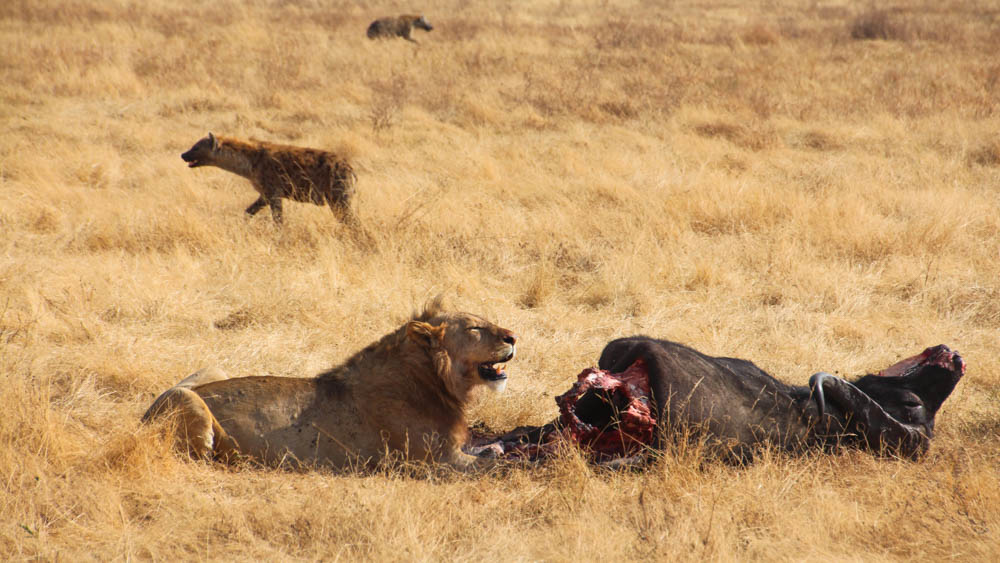 After lunching at the hippo pool we went in search of the illusive black rhino which was the only one of the Big Five we hadn't seen.  As we were looking we came across a hyena feasting on a wildebeest carcass which was a very dramatic scene.

The radio crackled to life again - the illusive black rhino had been spotted on the other side of the crater. We arrived just as the rhino was merging with a herd of buffaloes. It was in the distance but through my zoom lens and binoculars I could make out the horns. Leaving the rhino in peace we came across a serval sitting under a tree. We noticed that he was coughing I joked that he had a hair ball! He even got up and gave us a show. Amazing and so rare to see, could this day get any better?

Onto our next camp for three days: Nasikia Mobile Tented Camp in the Serengeti. I loved this place. By the time we left, the staff felt like family. It had its own bathroom with a toilet (once you have flushed you had to wait 20 mins to flush again – so not for everyone) and a fancy bucket shower. We heard lions calling through the night along with zebra, jackal and buck.

During the game drive the next day we went down to the Mara River to see if any wildebeest were crossing but came across a herd of elephant that were going to cross. One of the babies so small we thought he would drown but our guide Karem said the others would help him so we watched in anticipation with hands over our eyes just in case. He made it over with no problem hanging onto his bigger brother.

On the way back to camp we stopped to take a photo of a warthog when someone shouted “babies!” When I looked I saw cheetah cubs that were running from the warthog so we took off after them. As we were looking we heard a cry of a mother calling her babies; the babies answering with a chirp WOW!!! This was definitely the highlight of my trip seeing my favourite animal in the world plus the babies.

Last day in the Serengeti and we headed back to the river as this was our last chance of seeing a Great Migration crossing. We crept along the river then the shout came that they were crossing. We positioned ourselves right in the middle and our driver said over 20 thousand crossed in the hour we were watching them. We tried not looking down river as the ones that didn't make it were being swept away with the current to an unknown destination.

On our way home a black rhino was sunning himself out in the open. After looking for one for four days he was just there almost taunting us saying “where have you been?”

Our next destination was Kenya and the Masai Mara where we spent three days including my amazing birthday day.

There's nothing better than arriving at a small airport with tea and coffee and biscuits waiting for you and nothing better than a cold beer!!!  We soon arrived at Kichwa Tembo Tented Camp. They call it a tented camp but it is much more than that. Yes, the accommodation may be tents but it’s all 5 star!

Within 2 minutes of us entering our tent (which had a normal wooden door) we saw a male bushbuck just lying in the shade nearby, a rock hyrax on our roof and a little time later vervet monkeys came down from the trees and showed us their small babies.

The next day started with a hot air balloon ride under a slightly overcast sky followed by a champagne breakfast enjoyed under a light drizzle (but no one complained). Afterwards it was onto our next game drive. We came across two male cheetahs just lying under a tree not worried about us. That night at dinner I received the shock of the trip with the guys from the kitchen coming to our table with a birthday cake for me while singing and playing drums!!! OMG Shiree and Wanita had a lot to answer for; I cried all the way through – what an amazing day!

Next day was another early start and we were out looking for the illusive rhino we had been told was there the day before. All of a sudden our driver Peter saw it by some bushes I just managed to glimpse it but as we got closer it must have disappeared into the bush again. So frustrating! We waited some more until suddenly all these zebra came running out and there she was, just strolling out of the bushes like she owned the savannah with her nose and lip up smelling the air. She then turned and looked at us as if to say “what do you want?” haha! 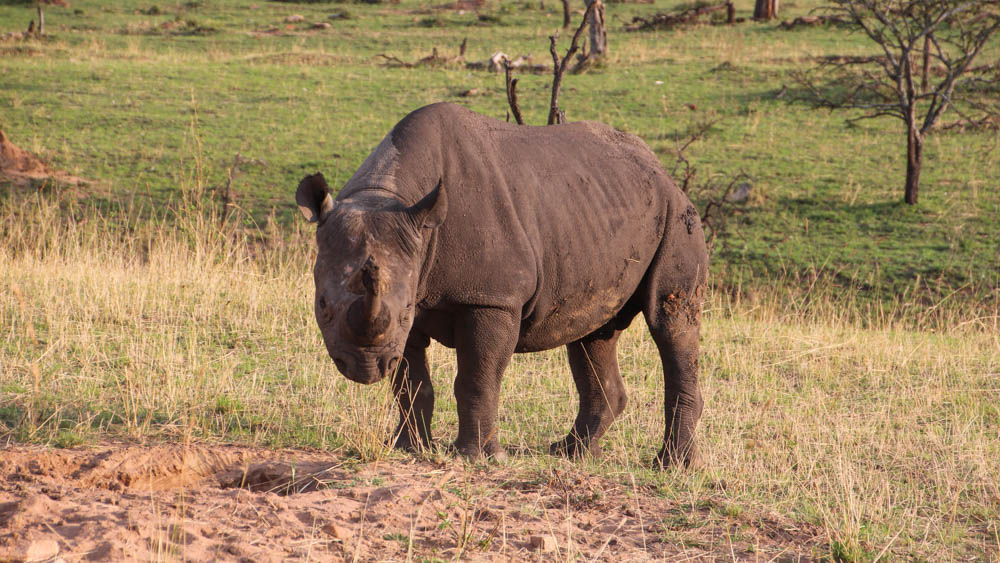 Next morning we hit the road to Nairobi and Giraffe Manor

OMG!!! You may have seen the pictures on the internet but it can't begin to describe this amazing place. We sat down outside looking over at the giraffes in the fields and near by the public viewing platform where thy were being fed. We couldn't wait! Shiree was on tender hooks wanting to meet them.

We were introduced to numerous giraffes and warned about a few. Kelly would head-butt you if you were not paying her attention and Eddy the male of group would give you a kiss if you had food in your mouth so we tried it. Not so bad it was really fun!

We returned to the manor where we were invited to attend the High Tea. The Giraffes all seemed to know that it was time for tea as they all approached like a feeding frenzy. It was a blast! You could not get the smile off Shiree's face! I reckon she went to bed with a smile and woke up with one too. 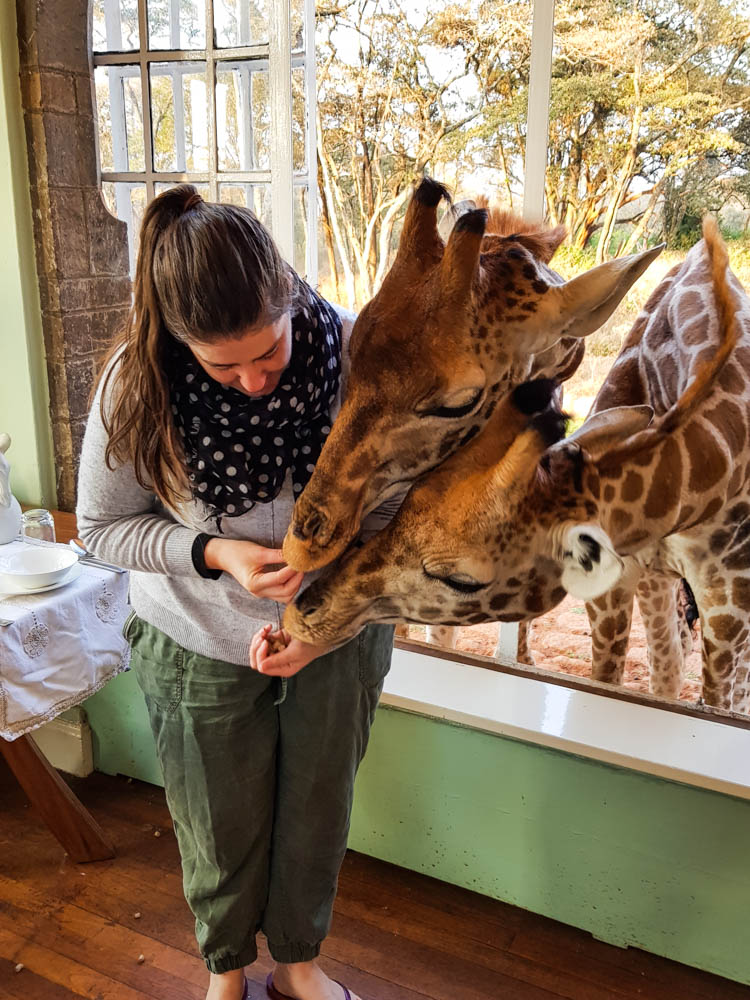 Next morning we enjoyed breakfast with the giraffes, they were sticking their heads through all the windows. The rest of the morning was spent visiting the Karen Blixen House – exactly like it was in the Out of Africa movie. That afternoon we visited the David Sheldrick Wildlife Trust where we met some of the orphaned animal babies. So so cute! I adopted a little elephant by the name of Ndiwa.

It does not matter how many times I have seen the falls (4 times) they are always different. It's all to do with the wet season and how much rain is produced. Every time I see it is still amazing and beautiful; one of the 7 Wonders of the World. 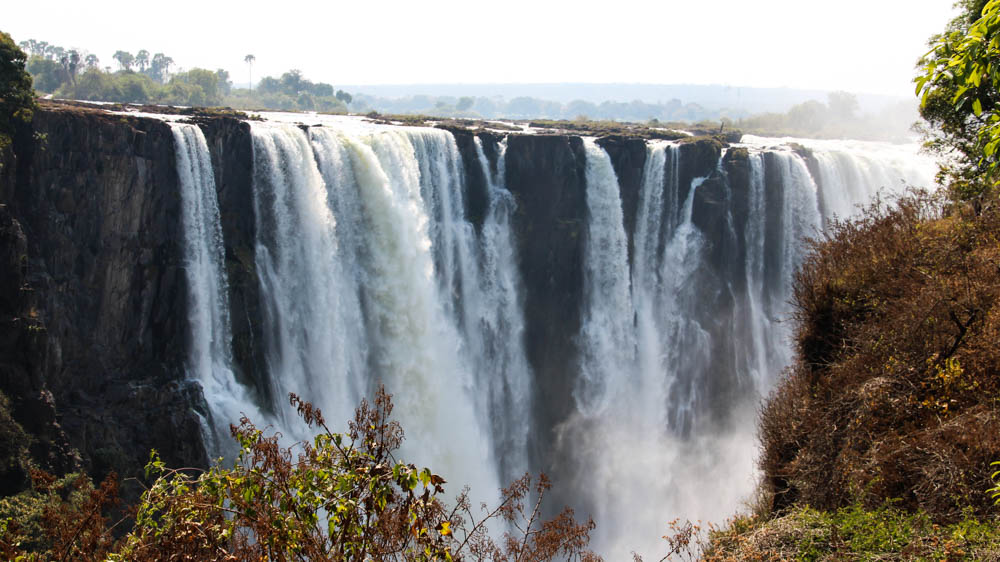 On our last day we made our way into Botswana and the Chobe National Park. Still as beautiful as ever and the most prolific herds of Elephants in Africa are in this place. We saw hundreds in the river on the bank and on the islands. AMAZING!!! We even had a hippo chase us in the boat, thank goodness the boat moved quickly! After lunch we then made our way onto the safari vehicles for our overland tour. Extremely hot but still managed to see herds of elephant, giraffe, hippos and a lioness who poked her head out of a bush she was resting under, determined that it was too hot and went back to sleep.

This trip has taught me a lot not just that I love Africa, but let me see it through other people’s eyes namely Shiree who had never been to Africa before. Seeing the expressions on her face and the smiles that went on forever was like visiting Africa for the first time.

Thanks again to Wanita and the team at Safari365 who looked after us exceptionally. We couldn't have done it without you!

Looking to go on your own adventure in East Africa? Start planning the safari of a lifetime today!